Latest News
Home /How to Love Nashville Even if You Don’t Love Country Music
Some posts on this site contain affiliate links, meaning if you book or buy something through one of these links, I may earn a small commission (at no extra cost to you!). Read the full disclosure policy here.

I remember the first response I got from a friend of mine last year when I excitedly told her that I was *finally* going to visit Nashville, Tennessee.

“I thought you didn’t like country music,” she said.

My husband, Elliot, got a similar response from a coworker this year when he asked to take time off work so we could go to Music City together for a long weekend.

Most people seem to (erroneously) assume that Nashville is a city exclusively for fans of country music. That there couldn’t possibly be any reason to visit if you don’t own a pair of cowboy boots and know the lyrics to more than that one Garth Brooks song.

This, of course, couldn’t be further from the truth!

While my first visit to Music City did indeed revolve around Nashville’s unique music history, I wanted my second visit with Elliot to revolve around… well, everything else.

Because yes, there are plenty of things to do in Nashville even if you don’t love country music!

Things to do in Nashville that don’t involve country music

I think you’re going to be surprised to learn about all the non-music ways to enjoy Nashville! Here are some of my favorite things to do in Nashville that don’t involve country music at all:

After music, Nashville is probably most well-known these days for its food. From biscuits to barbecue to over-the-top brunches, Nashville has such an interesting mix of Southern staples on offer.

On my first trip to Nashville, I went on a food tour with Walk Eat Nashville to try staples like hot chicken, warm biscuits, Martin’s BBQ, and Goo Goo Clusters. I LOVE going on food tours as a way to get to know a new city, and these Nashville ones are an excellent way to sample a lot in one go.

On my second trip, Elliot and I did our own thing when it came to food, focusing an inordinate amount of time (and, okay, money) on brunch.

Some of my favorite spots to eat in Nashville after two trips there include:

Biscuit Love – What started out as a food truck now has three restaurants in the Nashville area! We went to the original location in The Gulch. The brunch lines on weekends are insane, but you can get basically the same menu any day of the week; go for lunch on a weekday if you want to avoid the lines! Try their signature “East Nasty” sandwich.

The 404 Kitchen – Open for dinner and Sunday brunch, we opted for brunch here. They have a delicious menu filled with Southern specialties, along with some great boozy brunch drinks. You do need to reserve a table here in advance.

Butcher & Bee – I’ve been to this East Nashville spot twice now, and have not been disappointed with anything I’ve tried on their mezze-inspired menu (try the avocado crispy rice!). I’d recommend making reservations whether you want to go for brunch or dinner.

Martin’s Bar-B-Que Joint – Can you ever go wrong with whole-hog pit-fired BBQ? (The answer is no.) Elliot was skeptical about having to wait in a rather long line to eat at Martin’s downtown location, but even he agreed it was worth it!

Some other places I’ve eaten at and enjoyed in Nashville include Puckett’s Grocery & Restaurant (downtown), The Pharmacy Burger Parlor & Beer Garden (East Nashville), and Folk (a pizza spot in East Nashville). Elliot and I also enjoyed the 100-layer donuts at Five Daughters Bakery in 12 South.

Another great way to get an overview of Nashville is to spend a day hopping on and off the Old Town Trolley. The trolley runs through downtown Nashville, into The Gulch, around Centennial Park, and up and down Music Row.

Spending a day hopping on and off the trolley can be a great way to learn about Nashville’s history, and can also help you see spots you might otherwise skip (like the Tennessee State Capitol Building and the Parthenon at Centennial Park).

The Old Town Trolley has 15 stops all around Nashville and has informative and entertaining live commentary onboard. Your ticket also allows you to hop on and off as many times as you want in a day. Buy your ticket in advance here!

Nashville has a LOT of amazing street art that’s well worth seeking out. You could easily spend an entire day hopping from neighborhood to neighborhood spotting all the best Nashville murals.

One of the more famous spots for mural selfies is the WhatLiftsYou Wings mural in The Gulch. I liked wandering around this neighborhood for a little while, as there are a few other murals nearby, too, as well as some cool shops and restaurants.

Another great mural neighborhood is 12 South, where you can find a bunch of colorful walls all within just a few blocks.

And of course you can spot murals around downtown and East Nashville, too!

You might not spend hours mural-hunting like Elliot and I did, but they’re a unique feature of Nashville worth keeping an eye out for.

You’ve probably heard of the Kentucky Bourbon Trail, but did you know that Tennessee has its own Whiskey Trail? Well it does, and several of the stops are right in Nashville!

On my most recent trip to Nashville, I went with several friends to do a quick distillery tour and tasting at Corsair Distillery. If you’ve never done a distillery tour before, this is a great place to get a glimpse of the distilling process.

5. Hang out at a brewery

Nashville also has a huge brewery scene (though, what major US city doesn’t these days?), so if spirits aren’t your thing, you can definitely do your own brewery crawl.

I’m a big history nerd, and I love it when cities take old, unused historic buildings and transform them into something new. And this is exactly what they’ve done at Marathon Village.

Marathon Motor Works was a Tennessee-based automobile manufacturer in the early 1900s, producing the Marathon car up until 1914. After the company went out of business, the factory buildings went unused for decades.

In 1986, a man by the name of Barry Walker came up with a new vision for the old Marathon Motor Works complex. He wanted to transform the buildings into a creative community – and over the next few decades, that’s exactly what happened.

Today, Marathon Village is home to a variety of art studios and businesses, ranging from an olive oil shop to distillery tasting rooms to Antique Archaeology (the shop owned by the guys from American Pickers). This is where my friends and I did a tour and tasting at Corsair Distillery.

I love how they’ve refurbished these buildings, filling empty corners and hallways with old equipment from the original car factory. Across the street, you can also visit the small Marathon Motor Works Museum, where four original Marathon cars are on display.

7. Walk across the river

Many people don’t realize that Nashville is built along the banks of the Cumberland River. The river separates downtown Nashville from East Nashville, and is a unique feature worth exploring.

I highly recommend going for a walk through Riverfront Park, and then across the John Seigenthaler Pedestrian Bridge, one of the longest pedestrian bridges in the world.

If you run into a rainy day in Nashville, there’s always the option to spend part of the day at a museum. Many of Nashville’s top museums are music-related, but not all of them focus on country!

Nashville museums to check out OTHER than the Country Music Hall of Fame and Museum include:

You could also visit one of the stately homes or former plantations near Nashville like Cheekwood Estate & Gardens, Belmont Mansion, The Hermitage (former home of Andrew Jackson), or Belle Meade Plantation.

And don’t forget that Nashville, once nicknamed “the Athens of the South,” is also home to a replica of the Greek Parthenon in Centennial Park.

My second visit to Nashville included a meet-up with a bunch of college friends, meaning we needed to find things to do that were suitable for a big group of adults – and no, none of us were interested in the pedal taverns or party tractors down on Broadway.

Nashville has a few cool spots for groups to enjoy without everything revolving around drinking. My top two picks are Pinewood Social (either just go to hang out, OR reserve a bowling lane or two in advance) and Topgolf, which is fun even if you’ve never played golf in your life.

There are also several of those escape game spots in Nashville (great for groups), and even a virtual reality arcade called The Rabbit Hole.

Music has always been part of the fabric of Nashville, so I’d be remiss if I completely skipped over the heart of it. Yes, Broadway is lined with honky tonks and country music blasts out of every bar – BUT this part of Nashville has some seriously good live music (and even better people watching) at all hours of the day.

Even if you don’t love country music, it’s worth making your way up to one of the rooftop bars along Broadway for a drink or two.

Where to stay in Nashville

I won’t sugarcoat it, guys: Nashville can be really pricey when it comes to hotels, especially if you’re visiting over a weekend when there’s a big event happening downtown (and, honestly, it seems like that’s almost every weekend!).

BUT, luckily there are a lot of hotels in Nashville to choose from. Nashville hotels I recommend (that still go along with my non-music-themed list) include:

The Bobby – I drooled over photos of this hotel before my last trip to Nashville. It’s a trendy new downtown boutique hotel with a notable rooftop bar and lounge, as well as an on-site restaurant and cafe. (Read reviews on TripAdvisor | Book a room here!)

AC Hotel by Marriott Nashville Downtown – This hotel is brand new (it wasn’t even completely finished when we stayed in late March 2019!), and is located in a central spot downtown. It has large rooms and a very nice rooftop bar/terrace, as well as a big pool area. (Read reviews on TripAdvisor | Book a room here!)

Stay Alfred at 505 – Located right at the corner of 5th and Church, this condo-style hotel is perfectly positioned downtown. It’s also great for a longer stay since a room here includes a kitchenette and in-room laundry facilities. (Read reviews on TripAdvisor | Book a room here!)

21c Museum Hotel Nashville – Another unique hotel in downtown Nashville is the 21c Museum Hotel, which is basically a contemporary art museum inside a hotel. (Read reviews on TripAdvisor | Book a room here!)

READ NEXT: Getting a Taste of Music History in Nashville

Did you know there was so much to do in Nashville that has nothing to do with country music? What would be on your must-do list?

Pin it for later: 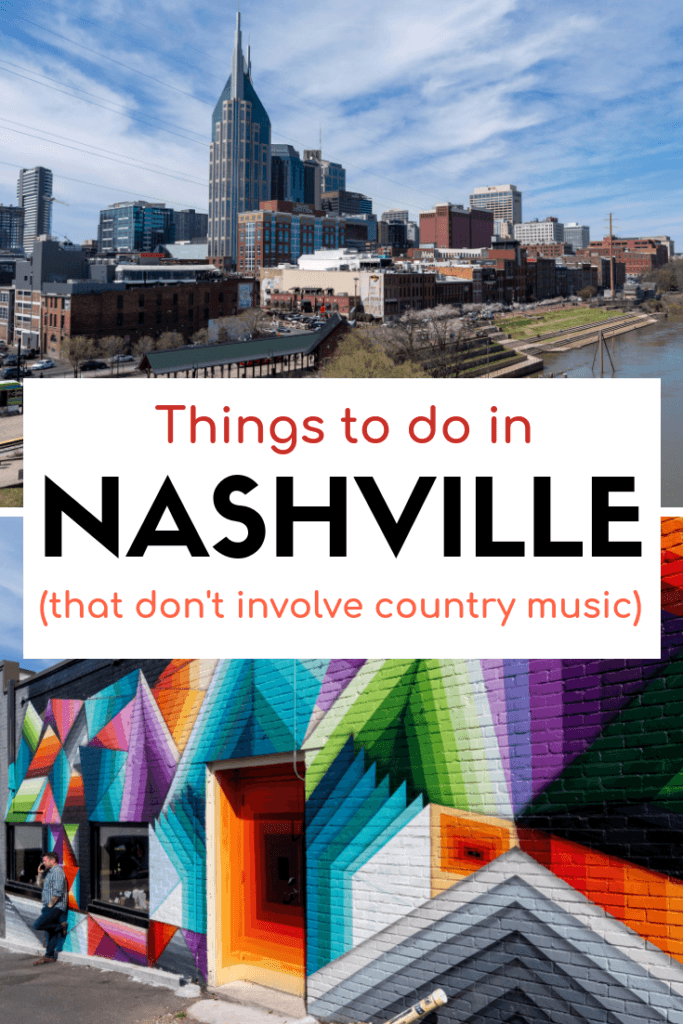 3 Days in Marrakech: The…

Escaping to the Moroccan Coast:…

How to Choose a Riad…